Drawing of our House

Griff drew a pic of our brick house yesterday.

Posted by Vicki Hendrix at 4:55 PM No comments:

So, Griffin has show-n-tell once a week and each week they do a different letter of the alphabet.  This week is letter "U".  I struggled earlier this week with ideas of what to do (umbrellas, unicorn, underwear, united states?) and before bed last night, Tom and I suggested sharing a picture of one of his uncles. In the middle of naming all of his uncles, Griff got all excited and said, "How about Uncle Eek!!?"  Done!

After G went to bed, Tom tried to stalk Dan's FB account and print a picture with no luck, (printer fail), so we gave up and went with really crappy plan B- a plastic toy cow with giant udders and decided that "Udder", although ridiculous, would be good enough... (parent fail)

This morning when I showed the cow to Griffin, and explained that we didn't find a picture of Uncle Dan, and he said, "Hey, I could draw a picture."  Great idea!  He did, and it was so cute... He gave Dan (in his words) "spiky hair because he has spiky hair and a big nose".  While he was drawing, he also said, "I have to leave room for Aunt Larissa."  I said, oh but Uncle Dan is married to Aunt Annie and Uncle Eric is married to Aunt Larissa.  "Oh".

We also had a conversation over breakfast that went something like this:

"Did you know that Uncle Eric and Aunt Larissa bought a new house?"
"Well, how can they carry a house?"
"They don't carry it, they just buy it and then move all of their stuff to the new house."
"But I still want to go to their house to play."
"Don't worry Griff, we can still go over to play."
"But Uncle Dan will be sad that Uncle Eric doesn't live there anymore, but maybe this will make him happy." (referring to his drawing...) 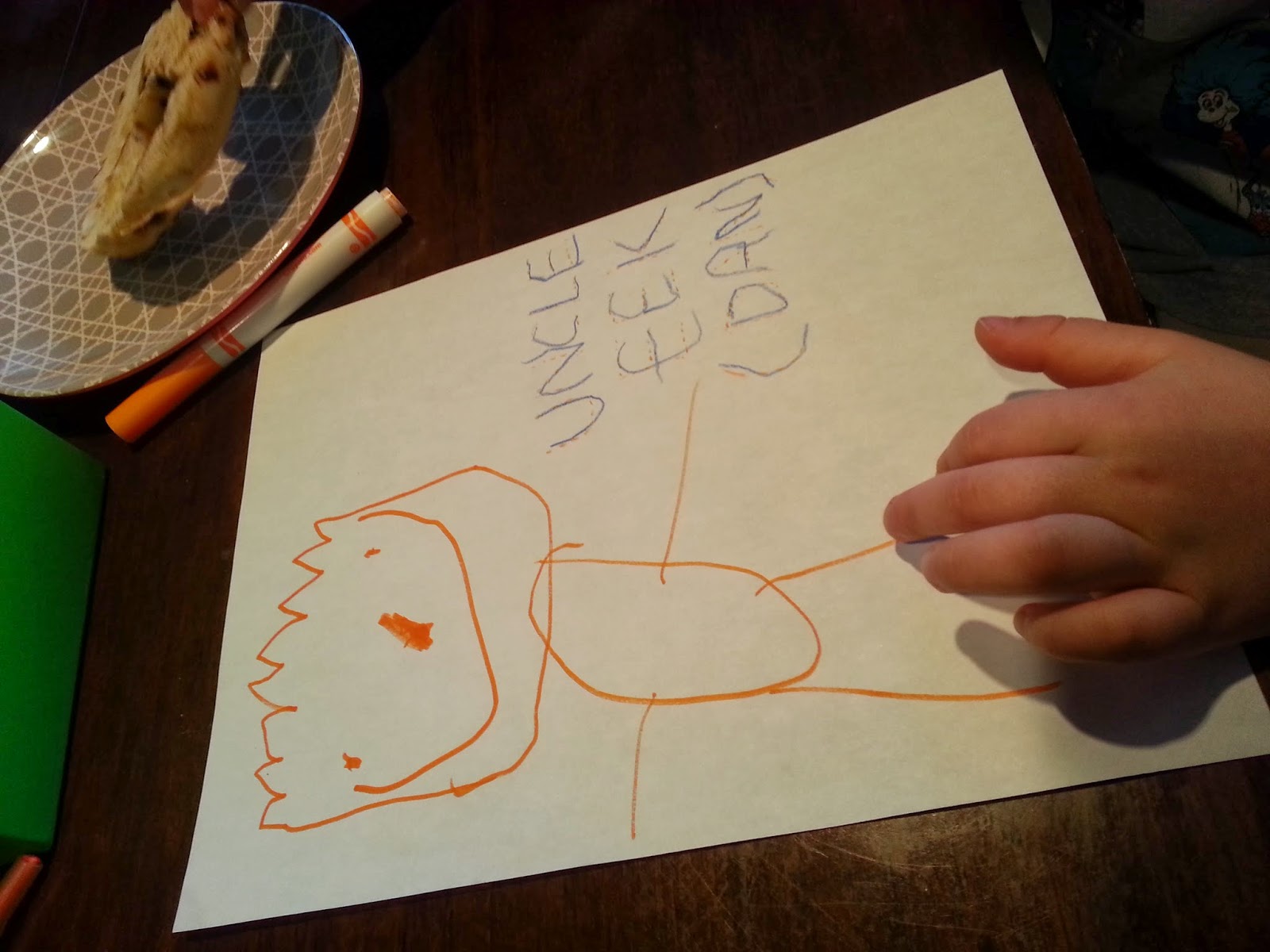 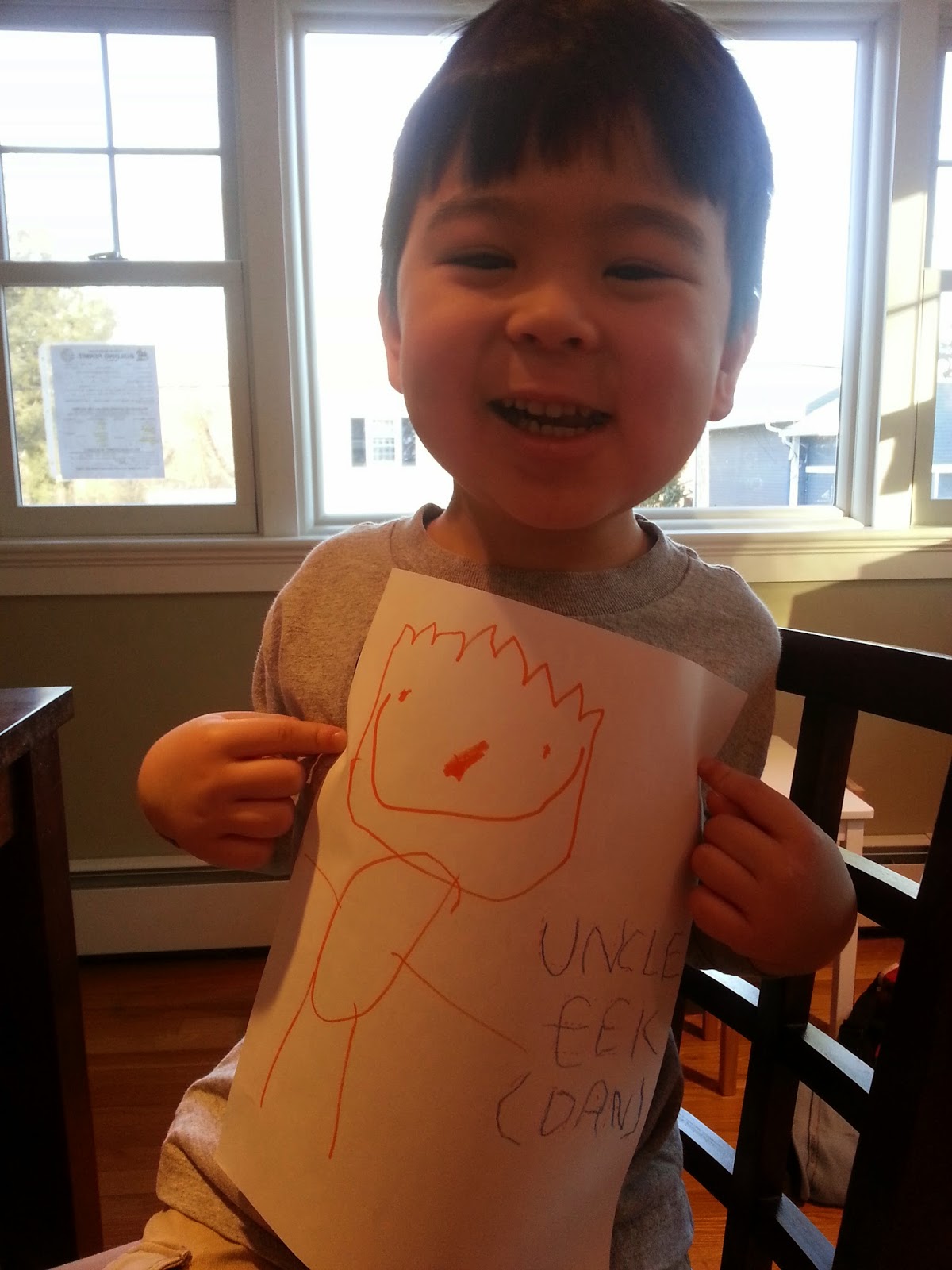 Posted by Vicki Hendrix at 12:45 PM No comments:

Griffin was well behaved and awesome last night.  He did his own washing in the bath and cleaned up his room without supervision - I just asked once.  While we were reading stories we played "opposite day" where you say the opposite of what you mean.  Griffin said "I don't love my little sister Vera."  That's what he came up with.  We read green eggs and ham and dragons love tacos and he laughed particularly loudly at my word-swap outs as we read.  I love that lil guy.

Griffin did an amazing job getting himself ready for bed last night..  He washed himself properly, got out of the tub and dried off, got his PJ’s out and put them on, brushed his teeth and peed, plus laid out his clothes for the next day and picked out stories to read.  All while I was taking care of Vera.  He was sitting in bed reading quietly when I came in for story time.  Go G.  I’m impressed.   We gave him a random present from the closet of surprises.  He deserved it.
Posted by T Hendrix at 3:25 PM No comments:

Griffin and I go to the depot for a lot of different reasons, especially now that the basement is under renovation. But the biggest thing lately has been for kids workshop time, which happens the first Saturday morning of each month.  Griffin has built a race car, a tic tac toe board, a toolbox, a ship, and now a Trojan horse bank.  He has a little orange apron with his name on it and he collects pins for completing each project.  There are always nails to pound and glue and paint to make a mess with.  The last one even had some screws.  He's getting pretty good at hammering nails.  Makes a Dad proud. 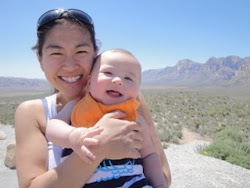 How Old is Griff Today?